A Guide to the Chakra Symbols

The Chakras are the 7 spiritual energy hubs that exist within our body. Many people are aware of the basics surrounding Chakras, but even those who practice Chakra cleansing and Chakra meditation may be unsure of the Chakra symbols meaning and how it connects to our use of these energy hubs today. What are the 7 chakras colors and what they represent… Discover them now!

What do the 7 chakras represent?

By breaking down each symbol, we can explore the specifics of each location in order to better understand how we can keep each Chakra clear and provide each one with positive energy in order to avoid our mind, body, and spirit being negatively impacted.

We’ll look at each Chakra in turn, exploring the Matras (both noise and thoughts), elements, colors, and names of each one.

The first of the Chakra symbols that we’re going to explore is the Crown Chakra, which rests at the top of your head, exactly where a crown would sit:

Depending on who you ask, some people believe that this spiritual hub is actually located slightly above the head and instead represents the location where the jewel within a crown would sit.

The other name, and also the symbol of the Crown Chakra is Sahasrara. Through the incorporation of a circle, this symbol represents the oneness of the universe and all beings within it. Surrounding it are the leaves of a lotus flower which represent eternity and prosperity.

The second of the Chakra symbols we’re going to explore connects to the Third Eye Chakra, which is located just above the middle point between your eyebrows: around the lower, middle section of your forehead:

This Chakra is associated with your pituitary gland, which is believed to play a major role in spirituality and the development of spiritual gifts.

The symbol for this Chakra is known as Ajna. It’s an upside-down triangle contained within a circle, with petals, leaves, or wings. The triangle represents the combination of mind, body, and spirit. It also indicates the knowledge, experience, and energy learned via the 5 Chakras below it, all being combined towards the Crown Chakra.

Many believe that each petal represents a vowel of the Sanskrit language, and the use of petals represents the gentle and airy traits of these vowels, much like a petal being nudged by a light breeze.

The Heart Chakra is located within the center of your chest. Before we explore the Chakra symbols that we associate with it, we need to consider what this Chakra represents. The location near the heart is symbolic of this Chakras’ connection to love, compassion, empathy, and spiritual healing:

The Heart Chakra is located within the center of your chest. Before we explore the Chakra symbols that we associate with it, we need to consider what this Chakra represents. The location near the heart is symbolic of this Chakras’ connection to love, compassion, empathy, and spiritual healing.

The Anahata is one of the more commonly recognized Chakra symbols. It’s a 6-pointed star contained within a 12-petalled flower. The symbol itself represents the central nature of this Chakra, with it being the middle point between the other 6. 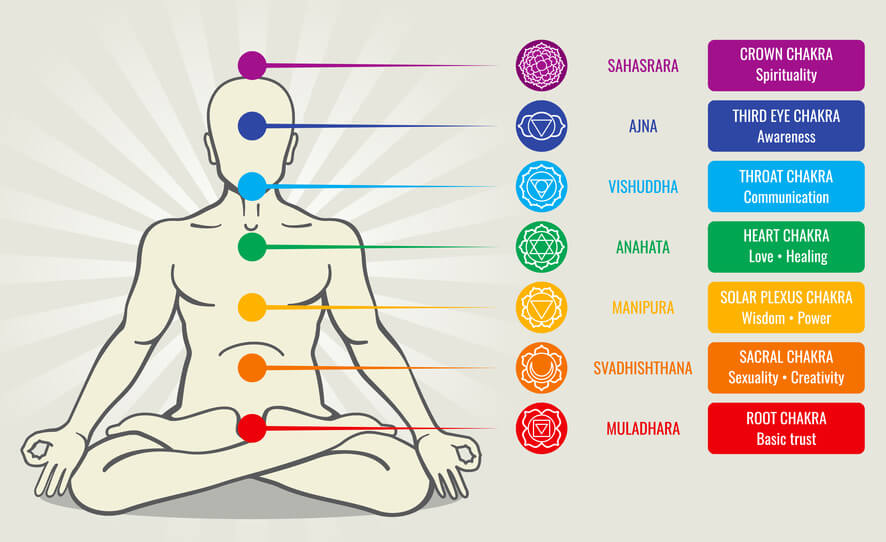 The Solar Plexus Chakra can be found between the bottom of your ribcage and your belly button. This Chakra plays a major role in free-will and is often believed to connect deeply with our confidence and self-identity. When this Chakra becomes blocked, we can begin to feel like we’re losing ourselves to the world:

The Manipura and its Chakra symbols meaning may seem a little similar to a previous Chakra symbol. This time we have another upside-down triangle contained within a ten-petalled flower.

It is believed that these 10 petals represent the pranas within your body, which tie into our manipulation of air and energy. Each person has 5 Upa Pranas and 5 Pranas. The triangle itself represents the concentration of energy as it builds higher and higher.

One of the last Chakra symbols we’re going to explore connects to the Sacral Chakra, which is located in your lower abdomen. This Chakra connects to our raw, primal emotions. Keeping this Chakra clear is essential to maintaining control and balance of our emotional state. It also has ties to whether or not we’re able to accept ourselves for who we truly are:

When it comes to the Chakra symbols, the Swadhisthana reflects the Sacral Chakra. It shows two connected circles (one slightly bigger than the other) joined at the top, held within a lotus flower with 6 petals.

The circles are indicative of the cycles of the moon and held within the lotus flower represent the natural cycles of life and death, which always begin again with rebirth.

The last of the Chakra symbols connect to the Root Chakra, which is located towards your tailbone. This Chakra is responsible for our survival instinct, our primal urges, and our connection to nature. All energy that is absorbed into the Chakra energy stream from the Earth enters through this initial Chakra:

The symbol associated with this energy hub is known as the Muladhara, and it carries quite an unusual form. We find a small triangle within a square, within a circle, which in turn is held within a lotus flower with 4 leaves.

The small, upside-down triangle represents the growing of energy within our body, but it also reminds us to remain grounded and to maintain our connection with Mother Earth. The 4 petals represent the four states of mind: Ego, mind, intellect, and consciousness.

A Guide to Healing Crystals

If you’re new to working with crystals either for healing or energy management, then this article will provide you with all the information you need…

Being able to perceive and interpret the colors of the aura means you are able to know someone in full. As a result, you are…