Blog of the Angels

Nemamiah represents Higher Intelligence, the one that is equally made up of intuition and rationality. 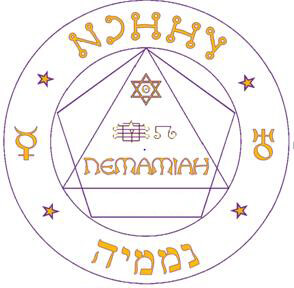 Nemamiah is the Guardian Angel of people born between January 1st and January 5th.

Nemamiah dominates everything aimed at annihilating mediocrity and exalting the wealth of your soul.
He encourages freedom and the freeing of chains, the equality of all things and universal fraternization.

This Angel and his sharp gaze see through appearances and lead us to the bottom of things.

Look at his seal at the beginning of this article. Nemamiah, the “Praiseworthy God” helps us destroy what prevents us from forging ahead inside us and regain a conquering and Triumphant mind.

Focusing on Nemamiah’s Seal when you invoke him to ask for his Help will enable you to understand the cause of all your problems and have the strength to overcome them.

What are his fields of action?

For many reasons, among which:

Learn more about the world of Guardian Angels:

Get your FIRST FREE ANGEL READING NOW!
Free+ the Name of My Protective Guardian Angel

Get your "FIRST FREE ANGEL READING NOW!" + the Name of My Protective Guardian Angel