The Ancient Origins of the Wheel of the Year

In our modern lives, we spend very little time outside in the elements. As such, we’ve become detached from the natural cycles of the Earth. We’re all familiar with the four seasons, but we’ve forgotten the deeper connections that our species once held with Mother Earth. The Pagan Wheel of the year is a map of the Earth’s natural cycles, one that allows us to reestablish the lost connections we once held. We’re going to discuss the overall benefit that the wheel of the year holds before going on to explore each of its phases.

What is the Wheel of the Year?

Many people are unfamiliar with the Pagan Wheel of the year. It doesn’t connect to any modern religion, as its origins are far more ancient in nature. Many Pagan faiths were deeply rooted in the worship and honoring of Mother Earth, and as they spent far more time outside than we do, they held a better understanding of the natural cycles and how they affect energy levels.

The purpose of the Pagan or Wiccan wheel of the year is to remind us of the energy fluctuations taking place so that we can stay in touch with Mother Earth and forge deeper spiritual connections during each phase. We’ll discuss the days that mark the beginning of each new phase from the perspective of the Northern Hemisphere. Simply flip it if you live in the Southern Hemisphere.

GET YOUR FREE READING! JUST FILL OUT THIS FORM:

This section of the wheel of the year is believed to have Celtic origins. The Celts would celebrate the passing of winter and would almost wave it goodbye through taking part in certain traditions and rituals. The name ‘Imbolc’ is Old Irish and has two translations. One relates to the pregnant state of a female, specifically ewes, and the other to being cleansed.

It’s not surprising that this phase is perfect for cleansing yourself of any negativity through welcoming in the warmer, brighter spring. Any healthy habits, whether it’s physical, mental, or spiritual, can be started during this phase, as it’s all about preparing for birth and rebirth.

Wheel of the Year 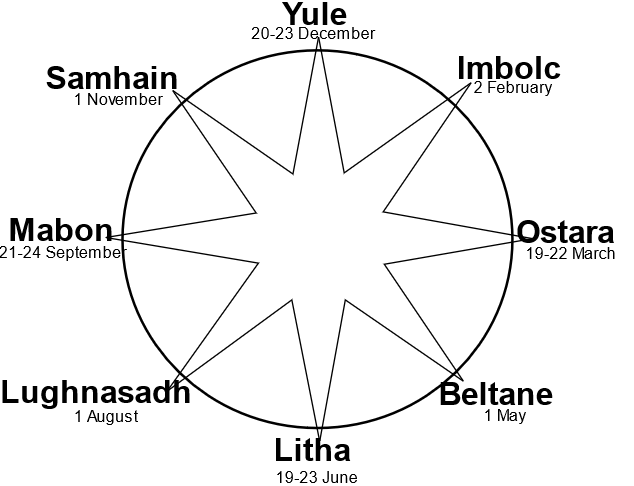 Most ancient cultures celebrated the Spring Equinox in some form or another. Even modern religions have their own celebrations, such as Easter which takes place during this phase. The resurrection of Jesus Christ reflects the birth and rebirth of nature, having died in the winter only to be reborn in the spring.

Having started new habits during Imbolc, Ostara serves as the time where these habits are set in stone. You’ve chosen the new version of yourself and now you’re ready to be reborn. Feel that your choices are in sync with Mother Earth as nature is thriving all around you.

This day marks the middle point between the Spring Equinox and the Summer Solstice, suggesting that nature is at its peak fertility. This phase marks the perfect time for growth and development. The Celts would celebrate fertility, life, femininity, and passion through various traditions, but in the modern-day, we can mark this day as defining how we’ll progress for the rest of the year.

If you’ve struggled to find your footing up until this moment, now is the time to grab hold of your goals and pull yourself towards them.

All ancient cultures and even many modern religions worshiped the sun in some form or another. Many buildings are built to point towards the sunrise, many deities are based on the rise and fall of the sun, and many cultures would celebrate the Summer Solstice by being grateful for life itself.

The Summer Solstice symbolizes the peak of the sun’s energy which shines down upon us and Mother Earth. On the final day before the sun starts appearing less and less, getting lower and lower in the sky, we should take time to appreciate the journey that all living creatures make from life to death.

Don’t let the name of this phase worry you, it’s pronounced loo-nah-sah, and it’s the celebration of the work you’ve put in so far this year. Now is the time to prepare for the winter by getting ready to harvest food, building shelter, and preparing for the cold, dark months that lie ahead.

Don’t feel sad during this period. The summer may be ending, but the winter months offer just as much opportunity for spiritual growth and community living.

Mabon and the Autumn Equinox (21-24 September)

The Autumn Equinox takes place during Mabon, and this phase represents balance. Here we find a balance between night and day as well as light and dark. We find the same balance during the Spring Equinox, but with winter approaching, the balance begins to feel a lot more important.

Mabon marks an opportunity to experience the natural harmony that Mother Earth offers us. Take time to meditate, experience the outdoors before the weather gets too cold, and be thankful for the supplies and shelter you’ve been given for the winter.

Samhain, pronounced ‘sow-in’, is a celebration of reaching the middle point between the Autumn Equinox and the Winter Solstice. The Celts acknowledged that the night was darkest before the dawn, and so they celebrated the descent into darkness as it brought them one step closer to the beginning stage of the cycle.

Samhain is the perfect time to appreciate the cyclic nature of life, and if any loved ones have passed away, this phase gives you an opportunity to pay homage to the lives they lived. Take time to enjoy the journey instead of worrying about the destination.

The Winter Solstice falls during Yule, which most Pagan cultures celebrated. This day marks the moment with the least amount of light, and yet it is still a celebration of the light that is to come. After this day, the sun will stay in the sky just a little longer and will climb just a little higher, and soon we’ll be celebrating life and rebirth once more.

Use this phase to look back fondly on all that you’ve experienced, regardless of whether it was positive or negative. Ponder the lessons you’ve learned, think of the friendships you’ve forged, and thank Mother Earth for all that she’s given you.

Equinox Meaning – Why is it important to know?

This article will be exploring equinox meaning.  For those of you unaware, the equinox is the time of year when the sun crosses the celestial…

The number of different types of crystal used within the world of spirituality is too high in number to count. So understandably it can all…