Many people are unaware of the Tarot card’s surprising origins. As with anything that dates back hundreds, if not thousands of years, there are various reports and stories that slightly contradict each other. We’re going to go as far back as we can and begin to work our way through the history of tarot.

The closer we get to the modern-day, the more noticeable the changes in the cards’ function and appearance becomes. Along the way, we’ll discuss some of the pivotal figures who influenced the development of the deck forever. So, what are tarot cards and their history? Let’s find out.

The History of Tarot Cards

When it comes to exploring the tarot cards’ surprising origins, there is no better place to start than the history of tarot cards themselves. You will likely come across contradicting stories surrounding the origins of a standard deck of playing cards and the tarot deck.

The common disagreement stems from which deck inspired which. . . It will also be important to consider how certain ancient cultures may have provided inspiration for the tarot cards, if not the cards themselves. So, much like the problem of the chicken and the egg, which came first?

The general consensus among those most involved in understanding the history and timeline of the tarot deck is that playing cards were first seen in Europe towards the end of the 1300s.

Get in contact with your Guardian Angel and receive your ANGEL READING, just by filling out this form:

These were similar to the standard deck of playing cards you’re likely familiar with today. This deck had made its way to Europe from Islamic countries where it is believed they had already been in use for centuries.

Interestingly, the tarot cards surprising origins (or at least the first mentions of their existence) can be found connected to an old French card game that was of particular interest to nobility at the time: Triumph!

Evidence of the tarot cards surprising origins doesn’t take place until the century after playing cards made their way to Europe. In 1440, the Duke of Milan wrote a letter where he requested that a unique deck of “triumph cards” be created for use at an upcoming event.

The letter specifically mentions that these cards should be different from standard playing cards even though they would serve a similar purpose. We’ll explore this original function in more depth in a moment.

The game ‘Triumph’ soon spread around the continent, and it wasn’t long until the deck started being referred to as “tarocchi” which is essentially the Italian word for “tarot”. By 1530, this was the commonly used name for this style of the deck within Italy and much of Europe.

However, it wasn’t until 1781 that the occult of France and England found that the symbolism contained within these cards carried certain energy. As they explored these ideas and learned more about using the deck as a divination tool, writings started using the French word used for this type of deck: Tarot.

The Mysteries of Egypt

Of course, there are mixed reports surrounding the tarot cards surprising origins. There was an ancient culture that was known (more so than any other) for using pictographs as a way of expressing deeper meaning, and this ancient culture is still shrouded in mystery to this day: Ancient Egypt. The Egyptians used hieroglyphs to tell stories and provide instructions. Tombs would use these images to guide souls to the afterlife after the body was buried.

The Ancient Egyptians were a deeply spiritual people, who held such practices in high regard. It wouldn’t be hard to believe that telling stories with pictures took some influence from this culture. However, it does seem that there is some confusion surrounding the origins of this idea. 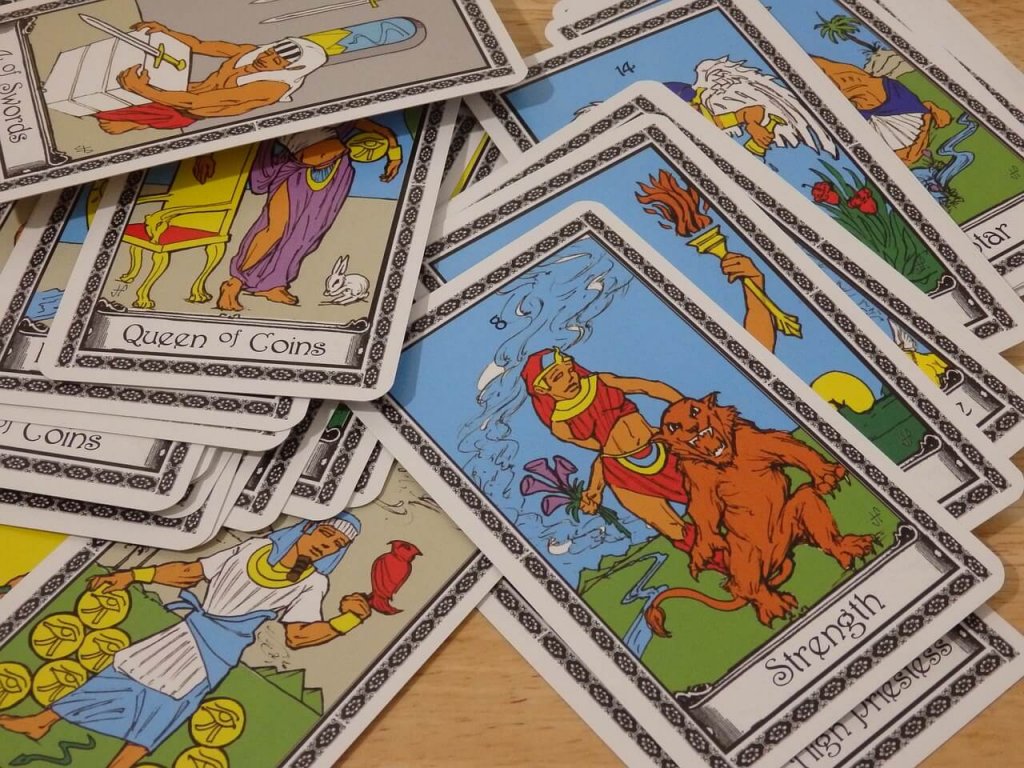 Around the 1850s, when the fortune-telling nature of the tarot deck was in full swing, a writer by the name of Antoine Court de Gébelin made a rather interesting claim. He stated that the ideas found within tarot had originated from a book put forth by Egyptian priests known as the Book of Thoth.

As the story went, European gypsies who had traveled from or through Africa had found this book in Egypt and brought its contents to Europe. However, tarot cards existed in Europe prior to the arrival of gypsies on the content. When they did arrive, it’s believed that they came from Asia rather than Africa.

Another version of the tarot cards surprising origins comes from the story of a sole surviving book from the burning of the Library of Alexandria, which made its way to Europe and became the base for the deck. Regardless of whether either story is true, there is no denying that some sort of connection between Ancient Egypt and tarot cards divination exists.

What does a tarot card mean? The Original Function

We should go back and touch on the original function of these cards as it paves the way for the development of the modern deck, and truly highlights the tarot cards surprising origins. To do this, we have to return to the game of Triumph.

In the 1400s, and certainly by the 1500s, the triumph was a card game that was similar to the game ‘bridge’. This type of card game is known as a ‘trick-taking game’. However, there were variations of this game and it’s within these variations that we find the origins of tarot.

A standard Triumph deck would include 22 special picture cards, which were known as trump cards within the game. There were also four suites, each with 10 numbered cards (one to ten) and four court cards. Sound familiar?

The purpose of these cards within the game triumph was to tell a story, of sorts. In this trick-taking game, cards would represent story elements or characters, and each player would be dealt 5 cards before a trump card was flipped. The rules vary drastically as there were many different versions.

An example of this can be seen in a book by Jean-Baptiste Alliette titled: ‘Etellia, or the Art of Reading Cards’. In this book, which of course discusses early versions of Tarot, Alliette mentions that the Tarot cards surprising origins can be found in a game known as Piquet, another example of a trick-taking card game. It’s believed that this deck was based on the Tarot of Marseilles deck. So, how did we end up with the deck we use today?

The Development of the Modern Deck

Even when Tarot cards were becoming increasingly popular, they differed to the standard deck that you find today. Jean-Baptise Alliette and Antoine Court de Gébelin played a major role in writing articles and books surrounding the use of these decks for divination purposes.

In 1789, Alliette (also referred to as Etteilla) actually released the first occult deck that was designed specifically for that purpose. The design of these cards was heavily influenced by the supposed Ancient Egyptian origins of the Tarot, something we still find within the deck to this day.

The design of these cards strongly resembled the Tarot of Marseilles deck, from which Alliette took much of his influence. The suit cards strongly resembled those found in a standard playing card deck. The original name for Alliette’s deck isn’t known, but it is often referred to as the Egyptian tarot. Does this deck mark the end of the Tarot cards surprising origins? Not quite!

The tarot cards surprising origins continue to develop over time. After all, each stage offers a new step towards the cards we know today. We find that the cards were in a constant state of flux from the 1500s until the 1900s. The names of cards changed, as did the imagery, and decks could be heavily influenced by playing card decks, Christianity, Islam, Egypt, or any other source. Cards commissioned by royalty would often be better quality but would also better represent the royal figures depicted on the cards themselves.

During the 1900s, two prominent decks were created. These were largely based on earlier examples (not least of all the Tarot of Marseilles deck and the Alliette deck). We have the Rider-Waite deck (which was released in 1910) and the Thoth deck (which was released between 1938 and 1943). We’re going to look at each of these in turn in order to highlight some of the important differences between them.

The first of these is the most popular deck used in English speaking countries today and is likely the deck that you’re most familiar with. It is here that the journey exploring the tarot cards surprising origins comes to an end. In this deck, previous inspirations (such as Christianity or Ancient Egypt) were toned down. For example, what was once known as The Pope card, became The Hierophant.

This deck marked an interesting change in style. The images themselves often appear rather simple in nature, but each card is actually packed full of symbolism. For example, fields in the background can appear ready for harvest or side characters can appear happy or sad. The general ideas from previous cards remain the same, but the actual depictions of the figures are considered vastly different.

In a similar manner to others who developed their own deck, A. E. Waite published his own book exploring the history, traditions, and meanings of each of the cards. The meanings are meant to represent interpretations only, allowing the readers to keep an open mind whenever a card is played.

This guide was released in 1910 with a revised version, named The Pictorial Key to Tarot, released in 1911. There have been many versions of the Rider-Waite deck since its release in 1909. Many of these later versions add more color to the cards, focus on some of the smaller details and symbolism, and even make minor changes.

The second of the more modern decks was created by Aleister Crowley and painted by Lady Frieda Harris. Crowley published ‘The Book of Thoth’ which as you may imagine connected Tarot to the original Ancient Egyptian Book of Thoth. It also ties into the work of Antoine Court de Gébelin.

This deck uses a different style to other decks. The cards often represent aspects and figures of philosophy and science, as well as various other occult systems that Crowley expands on in his book.

There were also some other more major changes within the cards themselves. We can compare these changes to that of the Rider-Waite deck. For example, in the Thoth deck, The Magician is depicted as The Magus, The High Priestess is known as simply The Priestess, Strength is changed to Lust, The Wheel of Fortune is simply Fortune, Justice is Adjustment, Temperance is Art, Judgement is the Aeon, and The World is The Universe.

Some more minor changes can be found within the suits themselves. The Page cards are known as the Princess cards, the Knight cards are known as the Prince cards, and the King cards are shown as Knight cards. Each of the suit cards also carries slightly different meanings, particularly in relation to how the meaning interacts with horoscopes. Crowley believed that astrology played a larger role within the Tarot than was currently viewed as being the case.

Exploring the Meaning and Metaphysical Properties of Shungite

Shungite, despite not being a crystal, still holds some incredible power that is certainly worthy of exploring. The healing and protective power of crystals have…

Leo Horoscope and the Archangel Raziel

Welcome to this guide of the Leo Horoscope and its archangel Raziel. This article will cover the basics of either your own Leo Zodiac sign…