What does this mysterious word (Abracadabra), which everyone has already heard or pronounced mean?

The root of this magic formula 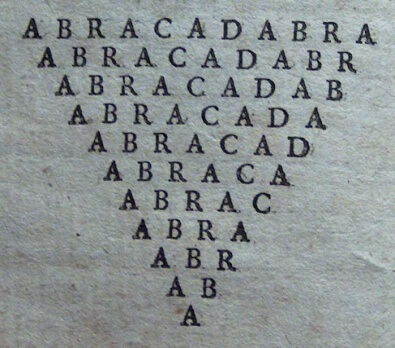 During the Middle Ages (the time when Alchemists knew the Alphabet of Charms), this cabalistic formula – which is based on very ancient symbolism – was used to repel all kinds of illnesses and, more broadly, to attract the protection of the Higher Powers.

It was the time when talismans were created and engraved with consecrated signs so that the one carrying it would be protected from the various malevolent influences surrounding him or her.

Of all the talismans and amulets, the Abracadabra was reputed to be the most effective, the most magical (due to the number of letters it holds and the way they combine between themselves).

Both positive and powerful, its mission is to send the negative forces to the abyss where nothing ever comes back from.

Arranging the letters in the form of a feminine triangle (with its point downwards) turns this triangle into the funnel in which its magical letters precipitate the negative forces captured through magnetization.

What’s more, the Hebraic words “abreg ad habra”, which mean “send your lightning bolt until death” reportedly lie at the root of the word…

Angel numbers are not ordinary numbers. They come to you from the angels as a way to communicate to assist, guide, and protect you. The…

4 Signs of Angelic Guidance – How to Spot them?

It is neither a myth nor a doubt in any mind that is pure and devoted to a faith that angel signs exist. There are…